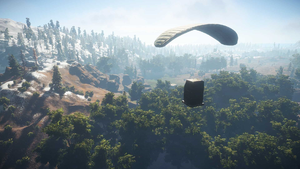 Airdrops are events which will cause a plane to fly over the map and drop many kinds of supplies in random amounts. These supplies are dropped in one to three large crates which will slowly parachute to the ground.

Some of the rarest and valuable items in the game can be obtained from this event. You will hear a loud noise of a passing plane when the event starts. During each event, one to three large crates will be dropped and they can include a variety of supplies.

This event can be random or set by the host of a server. Since the most recent dev blogs, Supply Signals can rarely spawn in military crates.

The plane which supplies these Airdrops is a variant of the C-130.

The Airdrop can be looted while still in the air, as soon as it can be reached. Other players will almost certainly be vying for the Airdrop loot. Even if you can't spot any other players in your direct area, you might be in someone's line of sight. Snap Traps and Land Mines from the drop itself may be used to booby-trap the drop site, on low population servers, but it is most likely that there will be a firefight, or one player will grab the loot and run.