Gamepedia and Fandom have joined forces and our combined teams would like to encourage all Rust fans to unite work together.
Please head to the community portal to discuss whether this wiki should merge with Fandom's Rust community.

Stability is a reflection of a structure's endurance; the more stable, the less likely it is to fall apart. If it reaches zero, it will break instantly upon placement. A stability percentage is visible when mousing over a building object at melee range. You can no longer place pillars with walls and are placed in the middle of foundations. This should be the second step when building a house, after completing the foundation. Pillars can only be placed if there are no other objects in their path, and if there is a foundation underneath. When building pillars on the second floor or higher.

Decay is a feature added to the game because of the massive amounts of player-made structures on the map, which the servers can't handle.

Decay works by slowly decreasing the health of the foundations of a structure. If left unattended, the decaying structures will break and, in co-ordination with the stability system, the rest of the building will soon fall apart as well, ultimately leading to the total destruction of a structure. Unlike in earlier builds, decay now affects any and all structures, no matter what the tier or location. Higher tiered structures will generally decay slower, and after a longer delay.

Some servers (mostly low population) like to opt out of the decay system to make the game more friendly to new players / roleplayers / casuals. These servers usually associate with other friendly tags such as PVE, FRIENDLY COMMUNITY, NO KOS, NO HELI, ANTI - GRIEF.

If a certain part of your base has been partly decayed, then you need to repair it with the resource used to create it. Metal Fragments fix metal structures, Wood fixes wood structures, and so on. To repair, take the Hammer tool, and ensure you have the relevant resources in your inventory. Hit the structure by left clicking, and on each successful hit, the health of the structure will visibly and physically increase until it is repaired fully. If a structure has already collapsed, it is not repairable and must be rebuilt.

Decay is prevented by building a cupboard and filling it with materials which are consumed over time.

So if you place a twig wall and run away, after 2 hours it'll start taking damage, and after a further 2 hours it'll be fully destroyed. With armored walls, it means after 24 hours it will begin taking decay damage, and after 5 days it will be destroyed. If at any point a locked door is opened or closed, the delay resets and objects in a 40m radius will have to wait for their decay delay again before taking decay damage. If you haven't played in a few days and your base is half destroyed from decay, you'll still have to repair it but maybe next time have a friend log on and open a door and check the base out so it counts as active and doesn't decay!

Here are some stats:

There were two server variables that were relevant for controlling the decay speed of structures in Legacy:

This controls the inverval in which all outstanding decay on the server is performed. The faster (shorter) the interval, the more often decay is applied to structures.

Maxhealth controls how much damage will be dealt per second. However, the values for these variables are not straight forward to set. Changing the decay time of structures should be done by changing the deploy_maxhealth_sec setting. Changing decaytickrate is only necessary if there are too many structures on the server that cause lag every time the damage is applied.

To estimate the time a structure needs to decay with given decay settings the following formula can be used:

This can be used to calculate the amount of time needed for an untouched structure to fully decay:

This graph will show the decay time in days by deploy_maxhealth_sec with deploytickrate at 300 for a structure with 1000 hp (e.g. Wood Wall). 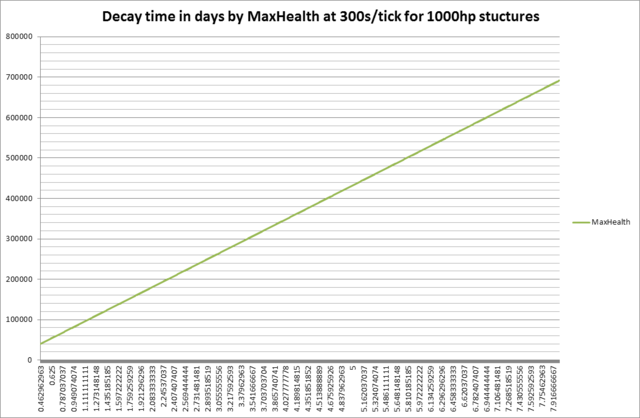 Decay time in days by MaxHealth at 300s/tick for 1000hp structures
Retrieved from "https://rust.gamepedia.com/index.php?title=Building&oldid=11568"
Category: