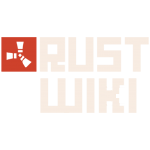 Welcome to the Official Rust Wiki
The Rust reference written and maintained by the players.
Please feel free to contribute by creating new articles or expanding on existing ones.
We are currently maintaining 4,158 pages (510 articles).
About

Welcome to the Rust Wiki

Rust is a survival video game in development by Facepunch Studios for Microsoft Windows, OS X, and Linux. The game only features multiplayer modes. Rust was originally released onto Steam's Early Access program on 11 December 2013. Rust was initially created as a clone of DayZ, a popular mod for ARMA 2 with the addition of crafting elements.

The objective of the game is to survive in the wilderness by crafting items using the materials gathered or stolen; the player starts with only a rock and a torch. There is only a multiplayer mode and a prevalent concept in Rust is to form and join clans with other players. Raiding is a very common action, usually done in large clans. Since Rust's first alpha launch, animals, hunting and the ability to craft armor and weapons have been added. It initially featured zombies as enemies, but subsequently replaced them with bears and wolves. Radiation was also removed due to the frustration it was causing players, although it was later reintroduced.